The Jade Amulet - a mysterious enchanted amulet covered in gold, made out of the finest jade. Here is one of the origin stories foretold by generations of Tibians. 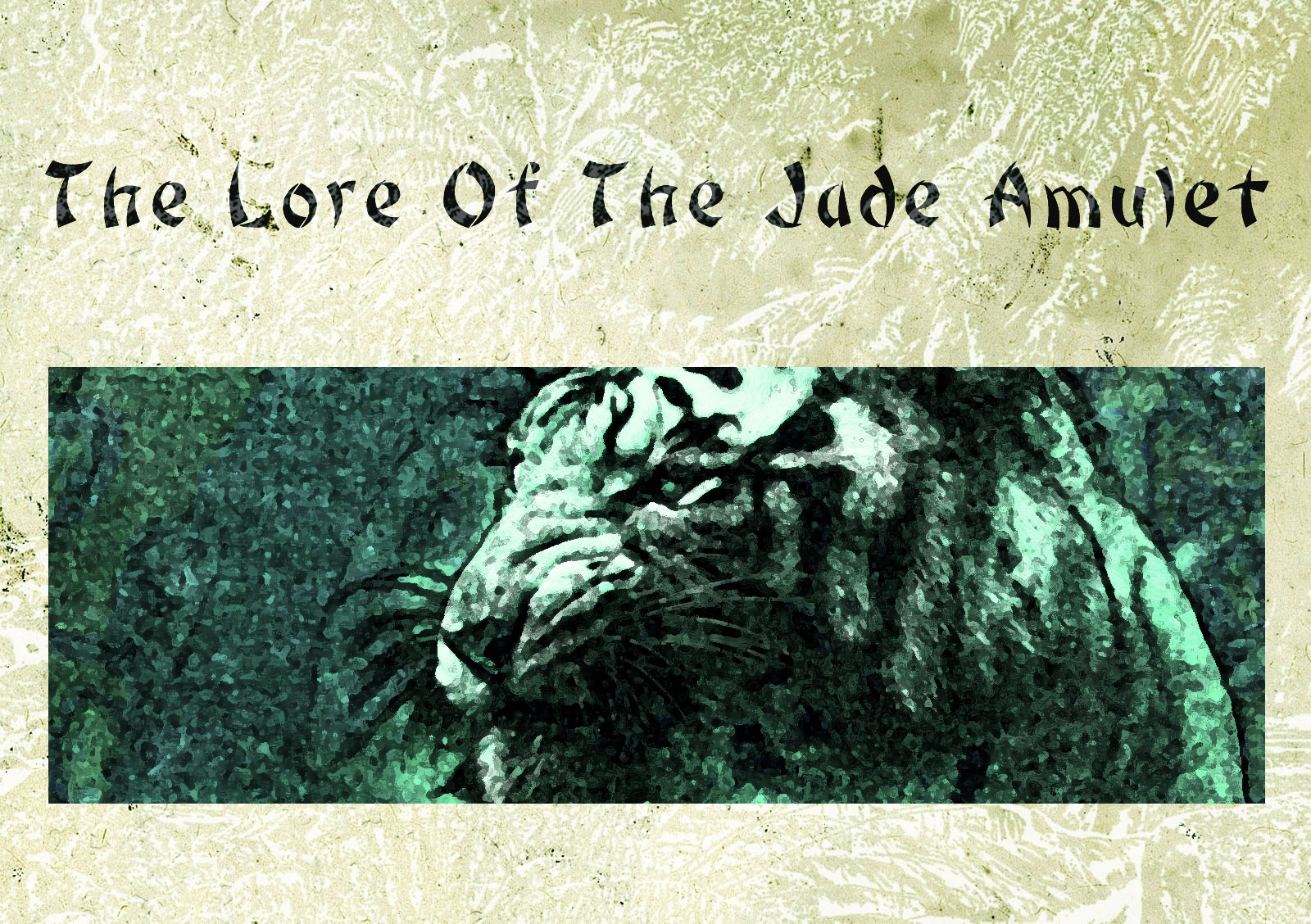 The Lore of the Jade Amulet 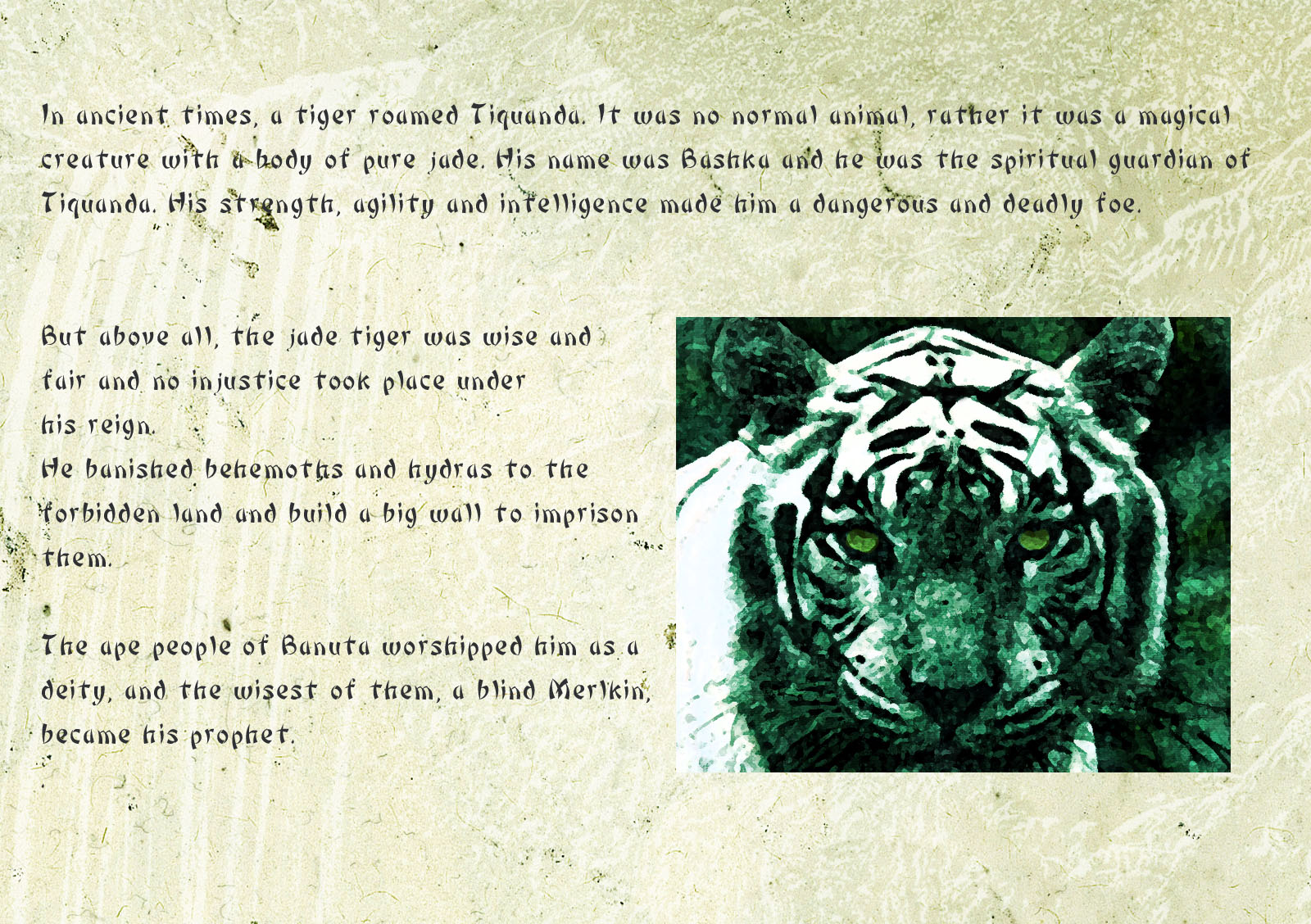 In ancient times, a tiger roamed Tiquanda. It was no normal animal, rather it was a magical creature with a body of pure jade. His name was Bashka and he was the spiritual guardian of Tiquanda. His strength, agility and intelligence made him a dangerous and deadly foe.

But above all, the jade tiger was wise and fair and no injustice took place under his reign.
He banished behemoths and hydras to the forbidden land and build a big wall to imprison them.

The ape people of Banuta worshipped him as a deity, and the wisest of them, a blind Merlkin, became his prophet. 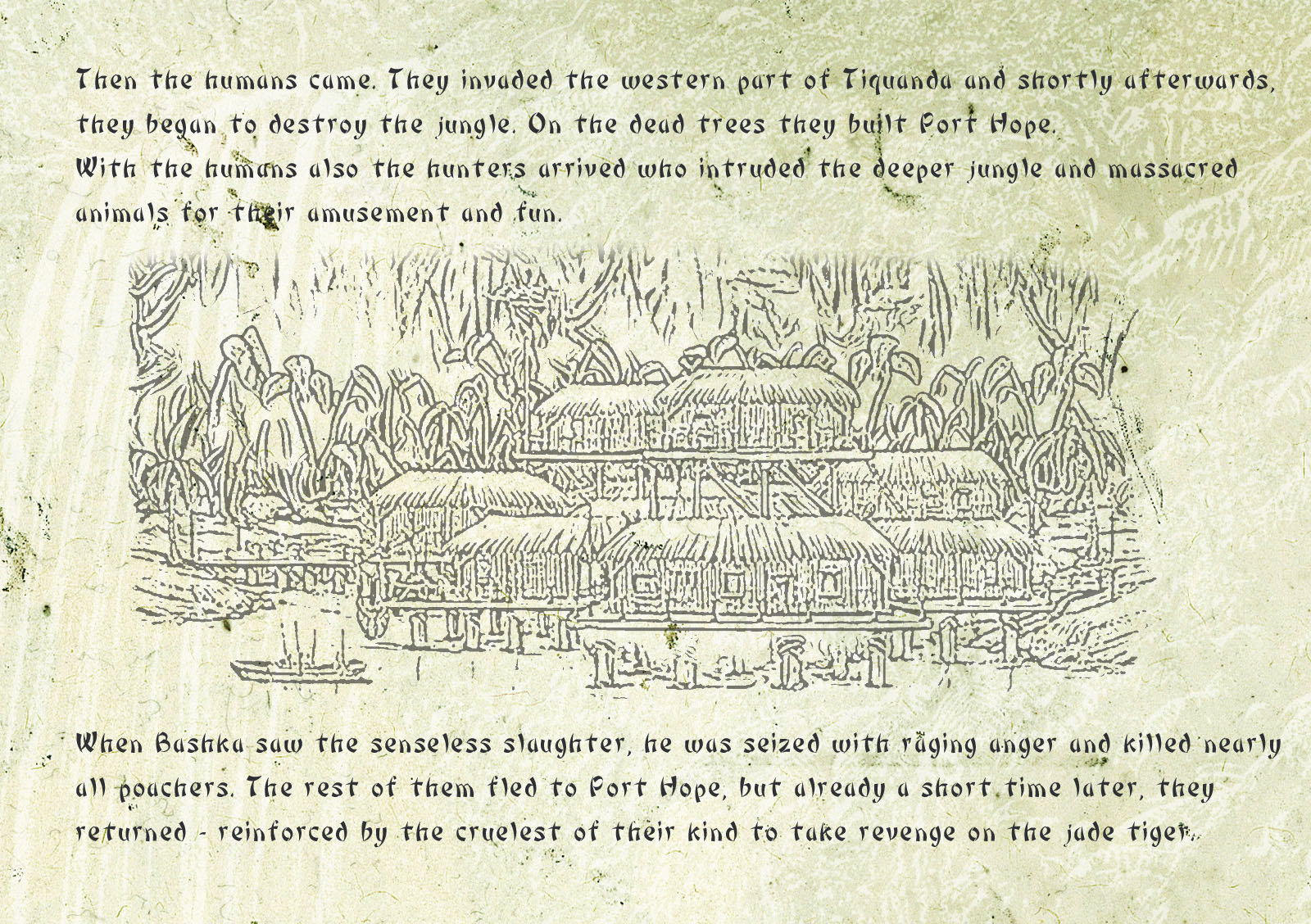 Then the humans came. They invaded the western part of Tiquanda and shortly afterwards, they began to destroy the jungle. On the dead trees they built Port Hope. With the humans also the hunters arrived. They intruded the deeper jungle and massacred animals for their amusement and fun.

When Bashka saw the senseless slaughter, he was seized with raging anger and killed nearly all poachers. The rest of them fled to Port Hope, but already after a short time, they returned – reinforced by the cruelest of their kind to take revenge on the jade tiger. 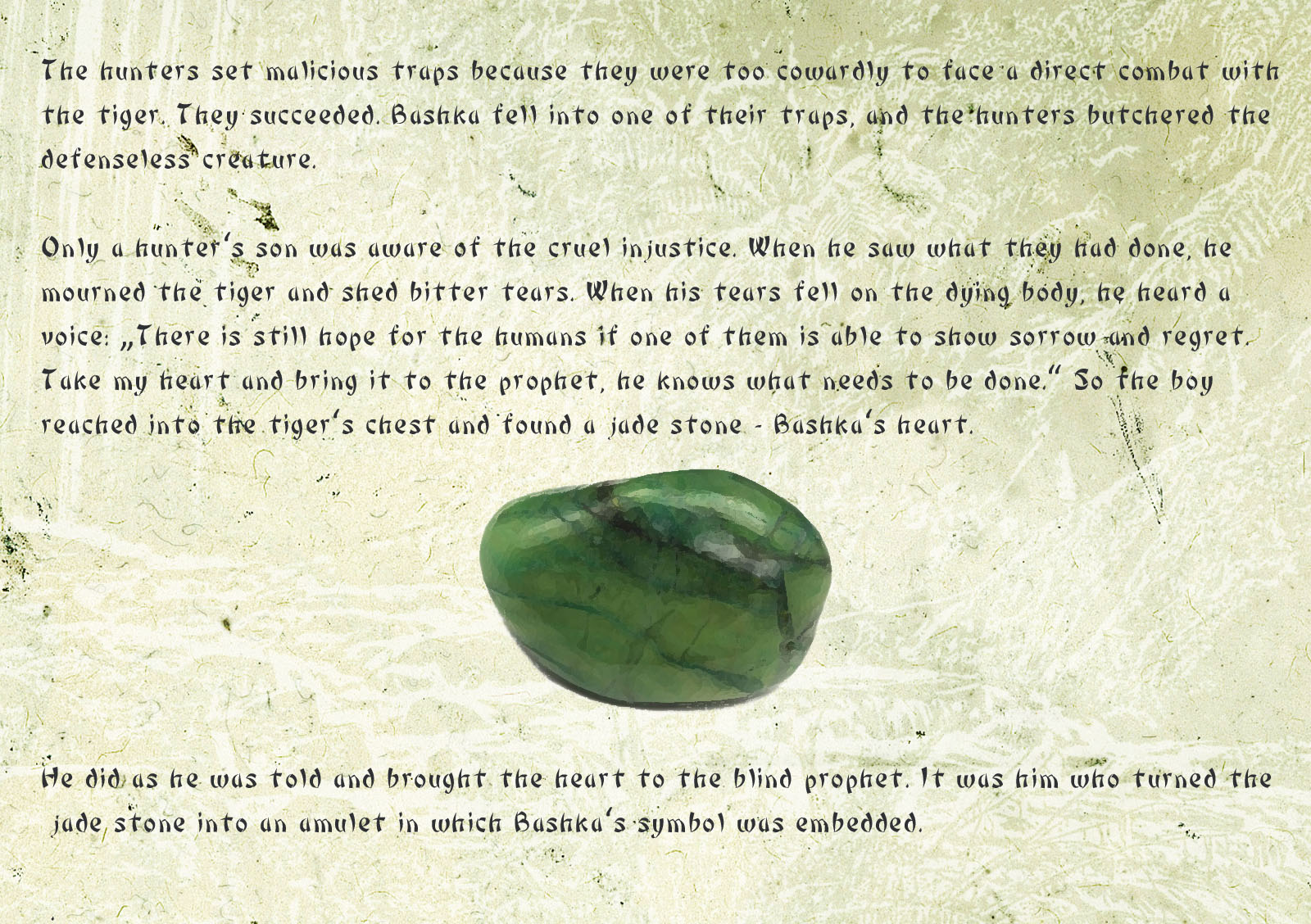 The hunters set malicious traps because they were too cowardly to face a direct combat with the tiger. They succeeded. Bashka fell into one of their traps, and the hunters butchered the defenseless creature.

Only a hunter's son was aware of the cruel injustice. When he saw what they had done, he mourned the tiger and shed bitter tears. When his tears fell on the dying body, he heard a voice: “There is still hope for the humans if one of them is able to show sorrow and regret. Take my heart and bring it to the prophet, he knows what needs to be done." So the boy reached into the tiger’s chest and found a jade stone – Bashka’s heart.

He did as he was told and brought the heart to the blind prophet. It was him who turned the jade stone into an amulet in which Bashka’s symbol was embedded. 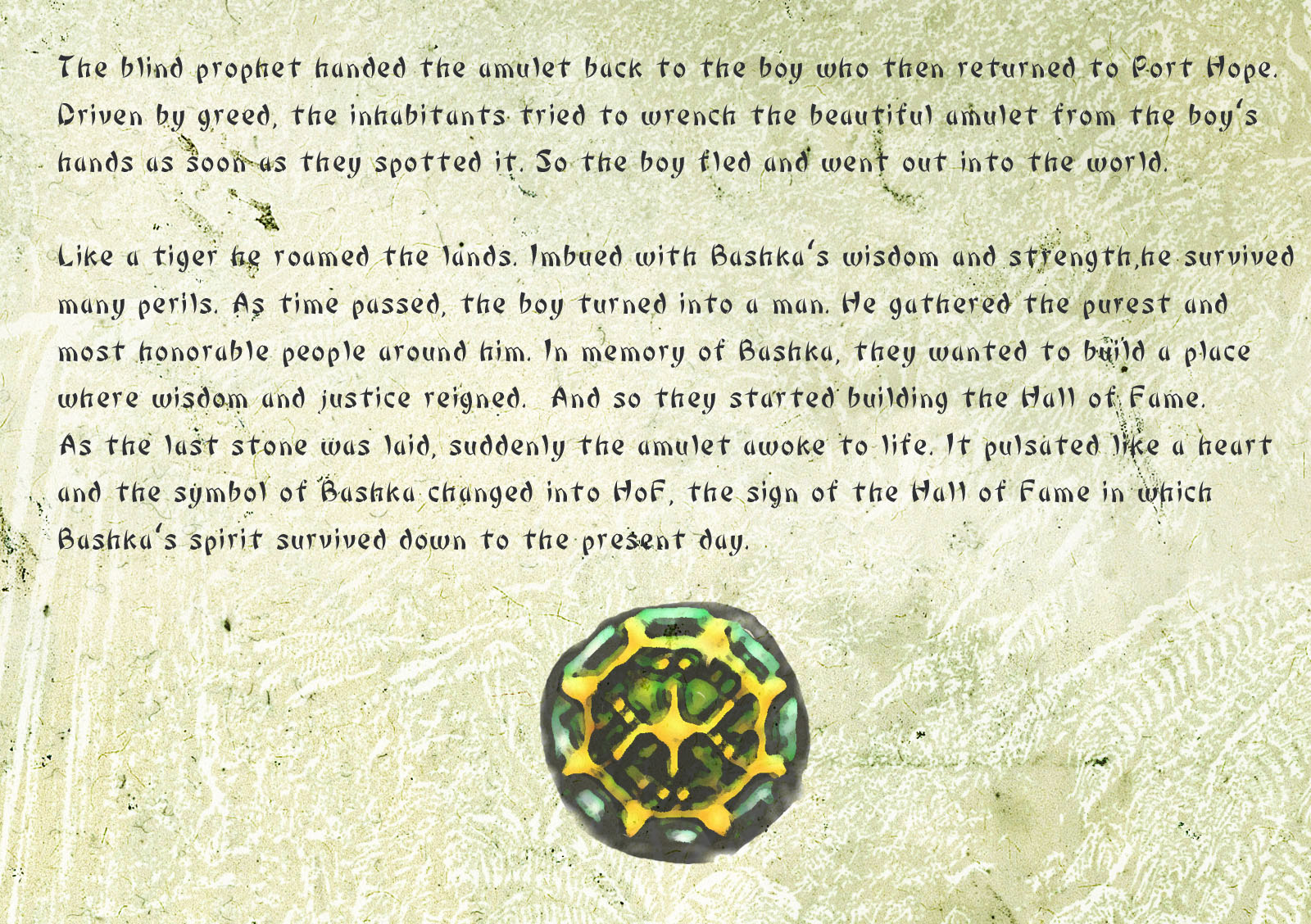 The blind prophet handed the amulet back to the boy who then returned to Port Hope. Driven by greed, the inhabitants tried to wrench the beautiful amulet from the boy’s hands as soon as they spotted it. So the boy fled and went out into the world.

Like a tiger he roamed the lands. Imbued with Bashka’s wisdom and strength, he survived many perils. As time passed, the boy turned into a man. He gathered the purest and most honorable people around him. In memory of Bashka, they wanted to build a place where wisdom and justice reigned. And so they started building the Hall of Fame. As the last stone was laid, suddenly the amulet awoke to life. It pulsated like a heart and the symbol of Bashka changed into HoF, the sign of the Hall of Fame in which Bashka’s spirit survives down to the present day.

The origin story of Jade Amulet, written by Ark11.